Posted by dkdesign on May 6, 2008 in Blog, Uncategorized | No Comments

The renovation of the historic Richmond, California Plunge is now underway. The natatorium that opened in 1926 had been closed since 1997 and was on it’s way to becoming demolished when Todd Jersey Architecture stepped in with their plan. They proposed an alternate design for the historic building that would cost half as much and would reopen the pool within a matter of years.

The construction work will be done in two phases.

Phase one includes the restoration of the original natatorium structure, which houses the swimming pool, and the renovation of the 10,000 square foot swimming pool itself. West Bay Builders has been chosen as the Contractor for phase one. Construction is scheduled to begin in May 2008 and be completed in early 2009.

The Plunge is scheduled to reopen upon the completion of phase two in early to mid 2010. 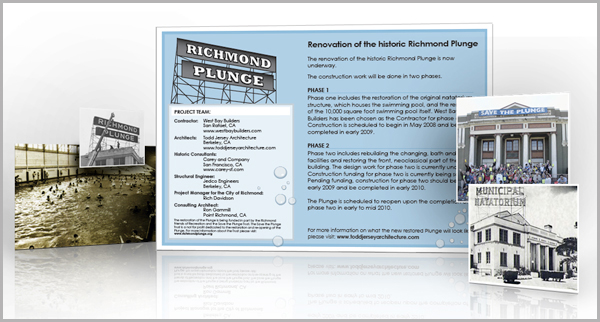